This has been in the planning for a couple of weeks now. I have slowly but surely uploaded the photos to save.. I don't know about you but it usually takes me 3 attempts before the 'add to post' bit doesn't crash /sigh.. but I get there in the end....

For a while I have done a lot of 'crafty preparation' die cutting things, cutting things out with scissors on the days my hands are behaving etc.. and I don't know about you but I have a box that I put things in.. that could 'come in' at some point..I hate to throw things away!.. anyway I had quite a few large brown thickish envelopes in there so decided one day when I was *very* close to throwing them out to cut them into wee shapes that I could add to cards in the future

Here be the envelopes 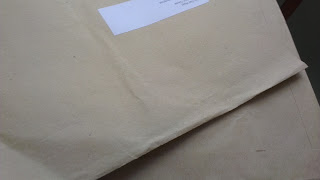 ..and here be the lubberly shapes (some not so wee) that I cut from them 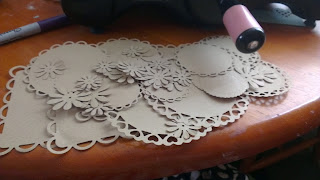 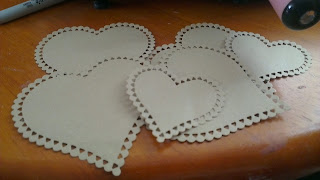 I was very impressed they looked like 'shop bought' brown paper only better quality lol...

...so impressed, actually, that I cut out some brown and pink ones in the same shapes so that I could layer them at some point :) 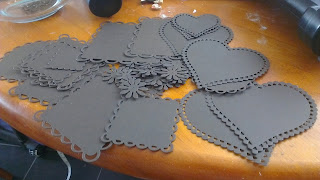 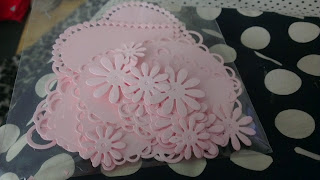 .. this cutting out lasted a looong old while...quite few days on and off... but I now have little bundles of shapes in various colours that I can add to cards when I can't do one start-to-finish ... most of the time, actually at the mo hehehe....

They made such awesome cards as this one 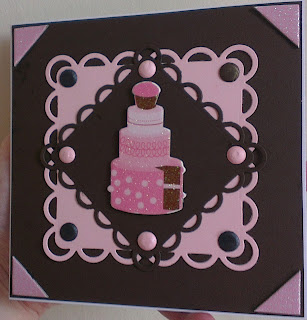 ..and also the one a couple of Rockin Fridays ago..

So.. thrifty or tightass on the brown paper front? Who knows but what I do know is that preparation makes for a much more chilled out Myz craft wise... do any of you prepare things like this or am I just superweird? lol

What's been Rockin in MyzWorld this week?

It's been a tough week with much stupid having-to-lay-down-ness and stupid people which has meant for the meantime I have left Facebook for my own sanity lol.. might be back before this goes 'live' as I got really lonely but i doubt it lol....but there were a few times during the week I have been letting out a 'yeay' so here are my positives... btw if some things don't make sense don't try to understand them- I have been writing this all week so it's probably difficult to follow and very tangent-tastic :)

Yeah you heard me.. GOIN OUT!... I walked slowly but confidently acrosss the square and had tea and a chat with my friend about 60 paces away lol... the chattiness and general being outness made me have 2 days mostly complete downtime after but.. YEAY OUT!!!!! I am hoping to do this more often and hopefully at some point there will be less downtime after.. I only wish she crafted... my nearest crafty friend lives in South Yorks so that's completely out... I don't know anyone near although they have craft events in Darlington that would take me and make sure I don't fall over (very embarrassing that! lol) .. and my crafty friend that visits once in a while got herself up the duff so she hasn't been up here in about...2 years it seems ;P

Been working on wooden hanging apple whatsits for a while now and this week my thoughts are sort of going the right way.. I think.... I even have one..nearly done! :)

..couple of negatives into positives....

(3) The Art of Camouflage

I just can't move about much without much wobbleage at the moment so the best I could do on Little Myz' birthday for her party food was move all the craft stuff to one end of the table :( .. scrappy scrappy... much sad faceage... 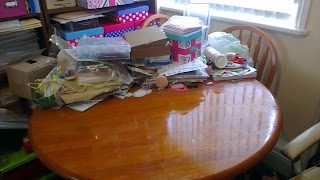 Get her princess blanket and put it over!!!! 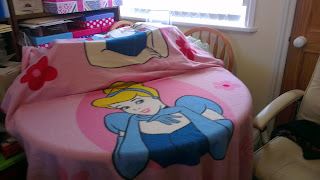 Not actually that shabby.. lol.. Little Myz was pleased and I even made use of The Mound.... 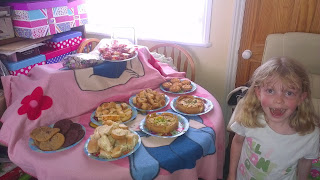 Bless her little doggy paws.. Sophie usually potters about while people get ready for work and school and when they are gone beggars off into a room for a great deal of the day (having thought about it possibly so she doesn't trip me up as I'm not that steady on my feet...) but the past week I haven't even been able to potter and have been in bed and she's been laying right next to me the whole time... and if I am on the sofa she gets up as close as she can to it... so negative- non movement and painage into positive.. aww factor of cuddle-dog 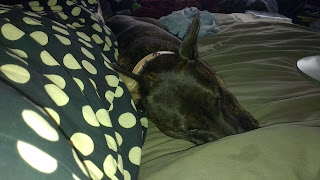 ..another neg to pos.... it was Little Myz' assembly today (Well ,Thursday,so yesterday I guess if this goes live when it's supposed to lol..) Wouldn't be able to walk as far as to get to the hall to watch it.. I do hate people staring at me and they do when I wobble or hold onto someone I really have to find a way past it :( .. anyway I digress.... Mr Myz was able to go... again!.... he has great boss I think :) .... and because of newfangled technology he was able to record little videos of it so I could see Little Myz In Action.... and what a proud Mummy I was... Mr Myz spoke to the teacher afterwards and in all their rehearsals it took 15 mins.. apparently 'live' it took 7 .. bless they must have been nervous hehe 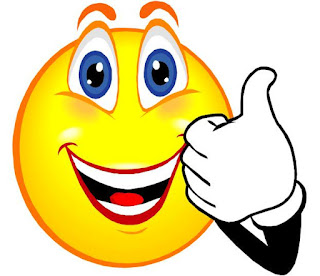 I think that might be about it I'm afraid... but woo I WENT OUT! That should count for a whole month of positives!!!! lol