All clear at docs this morning....felt a bit upset as if it was Fixable I could maybe feel a bit better right now but everything treatable was within normal levels :( ...actual blood count ok, coeliac test fine, iron fine, cholesterol fine..... then I thought hey a lot of my family have high cholesterol and I don't.... so at least This Thing, although it's cast a shadow over more than half my life, isn't life threatening (*), just a total *pain* when I can't go anywhere!.....

To take my mind off the excitement of tomorrow and stop myself doing stupid sapping clearing up I took the toppers I had previously made from the kit I got from Create and Craft last year, 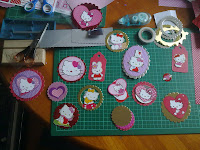 added it to the stickers I bought stuck to card, some die cut bits of whatever stash I could get my hands on that 'went' with the stuff and my luvverly new ribbons and decided to take Little Myz' advice and Just Do It.... not think about whether it was 'right' and Just Do It..... some worked, some didn't ;) 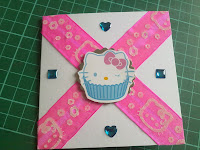 I liked these ones 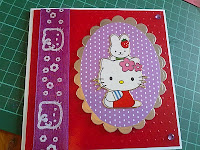 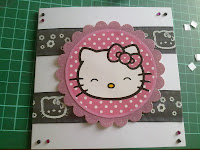 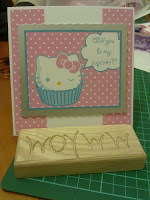 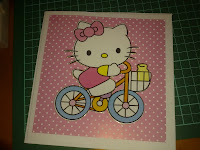 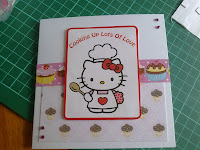 ...that kitty on a bike sticker is *huge*

I like to think this Kitty is having a burp... 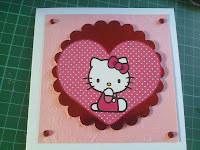 This was made with my Hello Kitty punch which is goodness-knows-where (I'd made the ribbon last year I think!) :( 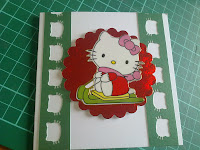 Jury is out on these: 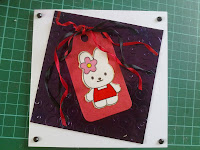 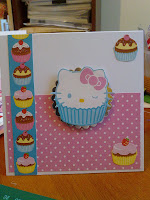 The tag and ribbons one may look better when the glue dries but I doubt it!... going to file it under What Was I Thinking I think...

...It was fun to have a play though

(*) well...unless I fall under a car dizzy or something but that's Not Going To happen ;)
Posted by Myzdamena at 06:08 6 comments:

...otherwise known as 'Christmas Stash Not on my Workdesk Wednesday'

Not all the Christmas Mess that was there for weeks....

We have to have a table that we can mess up

....so all my Christmas stash is back in the box and I took a photo of Christmas Cards So Far.. 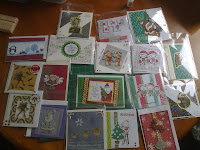 Not very many but i hope to get it all out again After Carmen.... and maybe even make more than 2 per week this time!!! hehe... darn those subversive cross stitches taking up all my crafty time! ;)

Unless I get out my hello Kitty stuff...... I took delivery today for my NEW RIBBONS!!! 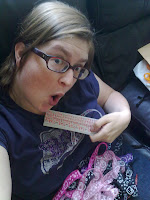 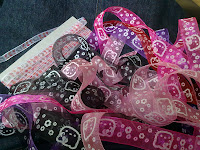 I loves a bargain I does... spesh since stupid benefits people still haven't sorted out Mr Myz' claim! *growl*

I've been trying to sell my kids without luck so I'm going to resort to Selling My Soul On Ebay, as you do....

Ooh I really love those ribbons!!!

...I'm going to have to refrain from playing with them though...I haven't even started to think about what I'm cooking for dinner....

Mr Myz gets home in 2 hours

Was waiting a bit before I posted these on here but they seem not to have arrived at their destination as of today and if I don't post em I'll forget lol... you know I'll forget!

Made these with some Crafty Ribbons Christmassy ribbons. Nowt special but it's the best a Myz can do... so that makes them perfick :p

Made this wreath and hadn't a clue what to do with it lol so card it was: 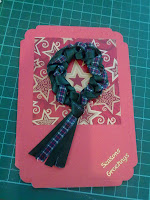 This hanging thing caused a lot of problems as it's see through but I guess it should always be against something so you shouldn't see straight through it? ;) 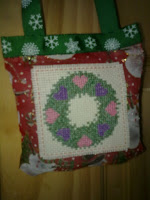 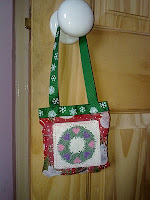 I was half way through this when I thought 'Just a mo this isn't working' lol but I seem to have turned it around... ish ;)

I seem to be stuck on hanging things as my 3rd and final effort was a hanging cross stitch... thing ;) 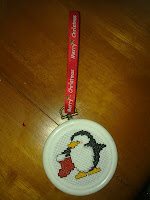 So as I said not earth shattering but the Best I Can Do So They Are Triffic :P

Not seen much crafting action recently so there was no change from last Wednesday so didn't post my desk. Finally gave in and went to docs last week. Rose tinted glasses me thought there was a chance someone like Merlin was in residence or something and he'd say 'run' and I would be able to...

Anyway managed to make some Scooby Doo cards today so thought I'd share. 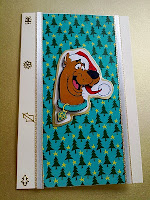 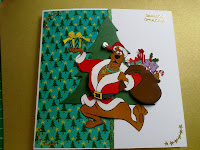 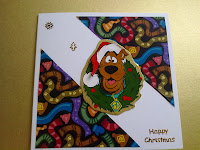 The Christmas coasters have ground to a halt til I'm able to buy more aida to make them.. they don't have any particularly naughty words in so maybe I'll post them here- I know a lot of people are scared to click through to my Subversive Myz blog for fear their eyes will fall out at what they see...so maybe they will appear here instead lol...

If you have any spare cash you know where to send it lol... stupid people can't seem to see Mr Myz' talent so he hasn't been snapped up for a job yet :(

What's on your workdesk this Wednesday?

As for me, the same as has been on there for a week now- I emptied out my box of Christmas stash and sorted it into piles...made 2 cards then.... 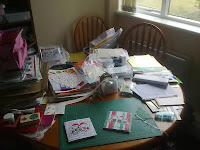 We Like Eating Dinner Off Our Laps In The Living Room...... honest, guv ;)

Anyway, this week has been full of trying-to-feel-better for when Mr Myz gets a job and can't walk Little Myz to school... and various subversive projects which have been taken from the table as they are *shhhh* secret.....

Ok you've seen my travesty...let's see yours...please link up with Julia and the 10 thousand (*) people prepared to bare all this Wednesday :)

Speaking of which I did think about it to get one up on Carmen but I don't think the poor desk could take it even though I'm 3 stone lighter now LOL....

Who knows I may even make it through half of them this week...if I'm lucky lol 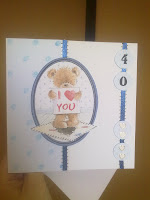 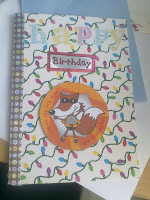 ..and here is the effort from Little Myz... she spent all afternoon on it and insisted on doing it herself... hence the spelling of Hugs... bless her cottons! 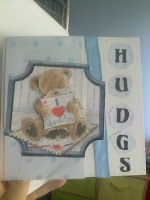 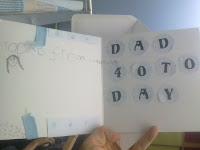 I thought fast and said oh... how inventive, the 'd' is for Daddy and you put it in the hugs as if you were hugging daddy?... she answered that, yes, that was her intention ;)

Resting for rest of day and then maybe creating some naughty cross stitches as it's been too long since I set my subversiveness loose ;)

Watch this space.. and the subversive blog :) ... if you have a strong enough stomach for infantile swearing and subversivetasticness :P