Hey Hey Hey look! I have actually managed to do something!

Ok, so, it isn't cards per se but it's toppers for cards! ... which I have lovingly coloured and had a play with the outsides of the scallops with varied effects.... some rather garish but I think the stickled outsides are ok.... only got some Stickles last week but now I want them all! ...but being Thrifty-camps-out-on-Ebay-til-she-sees-mega-cheap-stuff Myz I'll only get them if I can buy them for a song ..... so come on Ebay sellers start your Stickle-Singing! lol....and as for the dog- well, I think he's got far too much bling going on on his hat and he's completely coloured incorrectly but.... I think I still may use it..

...I have to get past the 'my cards are dire' stage and think, well, some people don't even make their own cards and at least I'm having a go. My hands are still rather shaky and it took ages to get these done start to finish (about 2 weeks lol) but it kept me out of trouble and has made me feel better mentally even if physically I still feel like a wrung-out dish cloth hehe... thank goodness for spell checkers or else I'd be talking gobbledygook here... or more than usual anyway ;)

Most are coloured with my WHSmith watercolour pencils (I actually really love the way the hedgehogs turned out!) and some are coloured with my Poundland felt pens lol... poor smirk girls... I really need different pens but I looked at the price of pens all you guys out there seem to use and they are so expensive :0 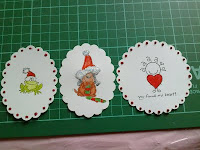 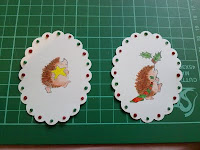 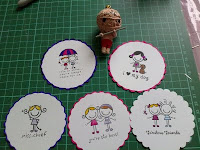 Whoopidoo sent me the little voodoo man- he's supposed to be very good for crafters' inspiration and I think he's actually rather good....only I am left with far too many ideas I can't put into practise .... come on muscles and stuff..get all rested and less shaky and let's get all these ideas churned out... I'll be like a cardmaking demon! *roar* !!!!

Special thanks to Whoopidoo and Craftygranny for the messages over the past few weeks. I love you guys! (No, really, I do! xxxxx) ... being unwell doesn't usually get me down as it's been with me for so long off and on.... but recently I have been feeling rather yuck mentally too (which I hate myself for, I hate feeling sorry for myself lol) ... you two make me smile on a daily basis... so take a star each *mmmmwah*

I don't get to see people as a general rule as the whole estate generally keeps themselves to themselves and I don't have people I can get together with and craft... so I pretend sometimes you two are here with me :) ... yeah I'm car-ay-zee hehe

*hugs* all round to anyone who reads this... definitely 2, but maybe even 3 of you ;) ... do remember that you can ease all my whingeing and boredom by emailing me on the link in About Me ;)

xxxxxxx
Posted by Myzdamena at 03:27 8 comments:

Sorry no pics of gorgeous cards today... still not right... lol shut up there at the back saying I'm never right in the head!! :P

...and you!!!.... you saying you have never seen gorgeous cards on my blog in its entire existence so why should I start now? ! :P

Anyway, I just thought I'd ask the *massive* pool of about 5 of you that actually read (lol) where you go for your digital stamps? I have decided not to even try to stamp for a bit and buy images or print out digi stamps but nothing I have come across so far floats my boat... and on Ebay everyone seems to sell Tilda and Penny Black... I guess there isn't much market for anything else... as people actually stamp their own and are proficient at it (grrrrr.....)

..and if you make your own stamps... will you sell me some?lol... I have taken to colouring in some stamped images I have bought on Ebay and been sent by the gorgeous CraftyGranny... I can cope with a couple before I get too headachy so it's a good way to get things going for when I can actually craft... ooooohhhh... the excitement

Hope all that made sense lol...

xxxxxxx
Posted by Myzdamena at 08:47 5 comments:

Still not quite up to sorting out craft stash and making anything again yet so what little time I had on the PC I've been on and off blog hopping, finding new blogs... getting upset at how everyone else seems to make *way* better cards than me... etc.....

I've tried to comment on as many things as I can as I really want people to know how much I love their cards, but I run out of things to say... people are consistently making perfect cards..... and IT'S DEPRESSING!!!!!!!! ... lol... not sure that came across quite right but how many times can you say 'Wow that's a great card' without people saying...Hey that woman is blog hopping and cut and pasting comments!

...hope that made sense *sigh* I get rather confused when I'm tired.... lately I have been getting more and more confused looks from my Hubby, Son-of-Mine and Little Myz .. when I get tired, you see, my mouth comes up with weird words which I really don't mean... like asking hubby if he wants trifle instead of coffee.... (no it's ok I've been checked out I'm not really a complete loon ... just a big one ;) ) ... anyway, just so you know when you read somethings really weird on here I don't mean it and probably don't mean to confuse :)

Anyway on my travels over the past 2 days I have found (and been shown) many many blog candies that people are running at the moment so thought that I would let you know in a post (if anyone is reading this lol) so you can look at my blog candy bar on the right and see them yourself.. they really are too good to miss!

*hugs* thanks to Carmen for explaining at length how to do blog candy pictures...so in the future I can link *properly* to the marvellous blog candies out there

So..hmm..this post doesn't seem to have a pic in that's not right.. I'll find a random one from my PC...

Ok here we go...lol.. and I hope to give you more to read in the near future... I blame all you guys with blog candies... all your wonderful giving has tired me out this weekend! 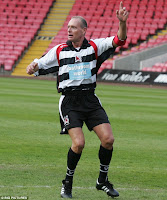 Not quite sure what I was on today... looking at the resulting card I think too much sugar and not enough rest....

...aaaaaanyhow.... somewhere's challenge, I forget where right now, not quite with it yet, required lace somewhere on a card... "oooh," thought I... "I have lace somewhere....." so off went I in search of said lace...

... 2 cups of tea, and much pulled-out hair, later I found the lace and as far as I can tell from the results, decided to make a very sickly sweet card... perhaps for a girly girl at some point who knows.... but it contained lace... and even though it's a really horrid pink card... and I couldn't even remember where the challenge was (*) ... I feel like I achieved something today as I actually *made* a card *and* it had lace on.... so take that, not-feeling-well! I have replaced you with happy-I-Made-A-Sickly-Lace card!

Lol... you can stop laughing now and clean up all the spat-out tea from your monitors :P 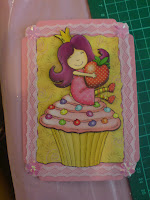 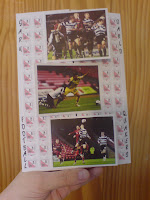 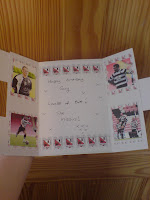 Here are some cards I made recently. The footy one is Darlington for hubby, his birthday was last week. I messed it up as half the people aren't actually in the team any more *rolls eyes* well I don't know... I've not been well... they are wearing Darlo shirts and that's enough for me lol 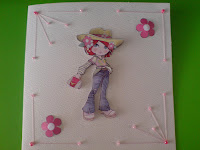 This one was my first with stitching on- not so sure about it but it obviously has the Little Myz seal of approval as she really wants it in her room lol... so it's got to be good if she likes it, right? ...heheh. Used my silicone glue on it... it's actually rather good, if a little whiffy

Hoping to get back into making lots of Christmas cards soon... started really early so I could get loads done but stupid feeling yuck has kept me from making any recently as I've had birthday cards to make

...and don't mention the 90th birthday photo/scrap book! ...... I decided to create it on the PC as it would be easy... well ok maybe easi-ER... but it's not turning out to be very easy at all.... not sure whether it will be finished by October AGH AGH hehe... I won't put anything here just yet it's not ready for viewing :0 -thankfully I didn't tell her I was making it so maybe I'll fall back on the sherry.... for a present, not to drink myself! ;) 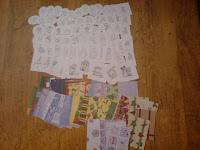 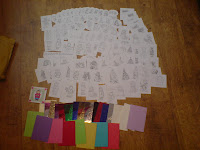 Not feeling up to much still but I got this huge bundle from MSE's craftygranny last week and I promised myself that when I felt up to it I'd post pics of her generosity. That day had been particularly yuck and I will remember for ages the way I felt at opening what was *supposed* to be 'a few stamped images'.... Not only did I get a stupendous bundle of stamped images and papers but so did Little Myz so she's been busy colouring those in while I do some heavy duty resting. I've even managed to colour some myself over the weekend but I don't know whether they'll ever reach the light of day ;)

Thanks Craftygranny, you're ace, and you really boosted my spirits and make me smile!