(a joint collaboration with Little Myz)

I went to the library in Colburn last weekend and they had a dinosaur making hour on. yeay! I went in the 6-11 year old section and the 5s and under were coming out as me and Mummy went in .. we were the only people in our session! ... but the Sports Centre has a fun day on so everyone else was probably there. Mummy said it was a good thing as she can't take the noise so a quiet library was her cup of tea- Mummy likes cups of tea....

The lady who was running the session was called Ruth- I like Ruth she is very kind and helpful and always has a big smile on her face.

I cut out my dinosaur finger puppets 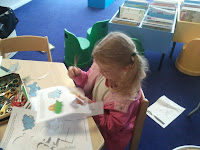 I showed one to Ruth 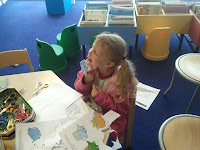 Mummy even made some! 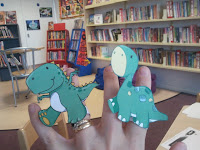 I was so proud of my puppets 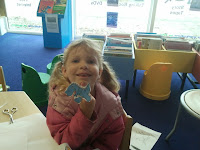 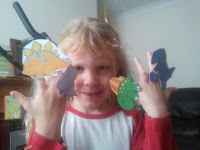 Thank you Ruth for making it such a fun day for Mummy and me.... they have something going on every month. If you live near Colburn maybe you can come and have a play next month?

Painted wooden stuff aside (if you aren't a FB fan you won't know what I'm on about but that's your fault :p ) I haven't really been doing much crafty wise. Plenty of resting has been in evidence so hopefully things will look up soon crafty wise- being stuck in house is all well and good when you can craft but when you can't it's a rather dire state of affairs...

Aaaanyway, I had an idea (I do sometimes!) of making some 'easy' cards .. which have the bonus of Little Myz being able to craft alone too as they don't need supervision- boooonus! So here are some expensive-but-cool Kanban Flying Fairy tunnel cards 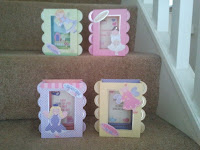 Aren't they dinky? Can you tell which one was made by Little Myz? ;)

They can be folded into an a5 envelope too.. woooo 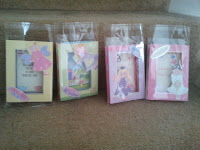 I also made another one but forgot to take a photo before I sent it lol but it's much the same ;)

I love kanban and Hunkydory stuff but it's so expensive.. although I guess you get what you pay for - you know you're not going to get crud from them lol

Big *hugs* and thanks to hte people who have been supporting me recently.. You Know Who You Are... (lol and for the people that haven't and seem to have gone out of their way to make life difficult for me- a huuuge raspberry to you! :P )